Apr10 Comments Off on Ratatouille

He made ratatouille – he liked it, liked saying it, ratatouille, it sounded matter of fact, you want veg, here’s your veg, a plate flung down like that first time he’d had it, Paris in the nineties, the second of two hot meals in seven days, a trip with a half-daft girl who didn’t leave the pre-war cheapie hotel for reasons never advanced, who didn’t 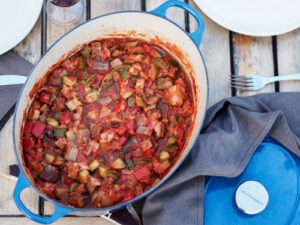 seem to like him for other reasons or maybe the same reasons, which made it easier to leave that tiny Marais room and wander alone, 18-years old in Paris for the first time, walking with Morrison and Kerouac and Miller to bistros and bars and a girl who beckoned him over and he thought about going over there and sitting down, thought about it but fled, still embarrassed now, staring in the ratatouille pot, he would make a different decision now, sure he would, staring in the pot he would go over and talk to her, say bonsoir and that way she pushes the hair from his forehead, touches his cheek, tells him he has a nice accent, is eet Eengleesh, no, eet ees Scotteesh, and a heavy lidded meaningful look, his omelette getting cold but let it, let it get cold, the first of those two hot meals, an omelette as he sits in elegant bistro light and the tinkle of laughter and the girl at the hotel lying there with quiet insanity and no omelette, the French make a good omelette, the girls with their big eyes, beckoning him but he went back to the hotel to do not very much for days, just drinking and one desultory shag, mooching about in an approximation of the approximation of why he had come here, to Paris, taking her, who came not with reluctance but a troubling inaccessibility and who didn’t eat, nor him again until that second hot meal, six days later, what a fabulous ratatouille, cheapest thing on the menu, there in the pot now, he was stirring the pot and smiling, he had it from a tin when he came back – it tasted like shit.