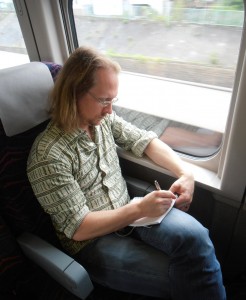 Tom McCulloch was born in Wick, Caithness in 1975.  After living in various places, following the work of his Exciseman father, his family settled in Ross-shire, overlooked by Ben Wyvis. The mountains have been there ever since.

Tom received a degree in History from Glasgow University in 1998, followed by a PhD in International History from the London School of Economics in 2005. He then turned his attention to sustainable development and was awarded a Masters from the University of the Highlands and Islands in 2008.

Both his papa and father are writers and Tom grew up with books and poetry. Norman MacCaig, Neil Gunn and Jack Kerouac were early touchstones, later on Gary Snyder, Céline, Alan Warner, Michel Houellebecq, James Kelman, António Antunes… Northwords magazine published Tom’s first prose and poetry in the 1990s and since then his work has been published in numerous magazines and journals. He has had three novels published by Sandstone Press, The Stillman (2014), A Private Haunting (2016) and The Accidental Recluse (2018).

Tom lives near Oxford with his wife Bev and two children, Ada and Orin.