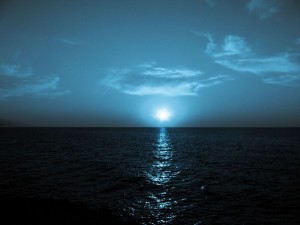 He’s at a party he doesn’t want to be at. At Christmas, there’s only so many excuses you can roll out. A huge house by the sea, took him an hour along the coast road to find it. In the moment between tipping his head back to down another drink and lowering it again a beautiful woman appears. She’s smiling. Takes his hand. They don’t speak but he looks directly at her and feels her past and future tune into his. In silence, they go for a walk. The guests turn and watch as they move through the crowd, smiles playing on their lips. Outside in the dark fresh night she seems to shrink slightly, hair tossed by the soft wind off the restless sea. Each gust reduces her more. He feels a growing panic as they pass along the sand but can’t pull away, held by the sadness in her eyes. She’s drawn towards the sea, gaze flickering to the waves and gentle swell, still shrinking in front of him. Their feet are wet now but she moves further into the surf. His hand slips out of hers and she’s gone, a silver shimmer fading on the water. He’s up to his thighs, the lights of the mansion behind him. In the lull of the waves he hears laughter tumbling across the wisping sands.