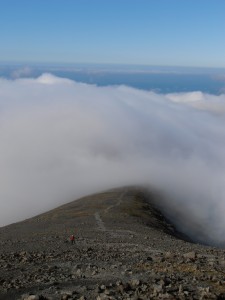 Neil Gunn. James Robertson’s impressive Neil Gunn Memorial Lecture takes me back. To Highland River, The Atom of Delight, The Well at the World’s End… When I think of Gunn I always think of Zen. It came to meet him in the Highlands. An interconnected wholeness. No self. You’d expect it more atop a Japanese mountain, a moment of illumination as mist drifts in cypress. Not Lairg or Achiltibuie. But that’s where Zen first came to me too, through Gunn. He wrote and I glimpsed. Something between the words, bigger than me but still containing me. The buzz was subtle, Gunn writing me into a new space. Zen when I hadn’t heard of Zen. Maybe that’s when I started coming across things. Like one morning I was brought up short by a dead frog. Walking along and there it was, cartoon flat on the pavement as if squashed by the Monty Python foot, so overwhelmingly present I had to stop. Same thing once happened with a stone. Just lying there on another pavement. A stone happening, the life of a stone happening, just doing what it should be doing, which is being a stone. And absurd at the same time, to me, the person looking at the stone. Probably because I lacked empathy, certainly for the stone but maybe a little more for the frog, it being a creature, like me, while the stone was, well, just a stone. You could say it about any inanimate object. It’s just a book, a waterfall, a welly boot. The wholeness Gunn revealed was an all-compass mountain tumble of everything, animate or otherwise. True empathy should mirror that wholeness. So if the stone was absurd then so was I. It’s a refreshing perspective and the ego doesn’t like it. I was once hiking in mist with my father, up Beinn Fhada. Nothing to be seen all day until, at the summit, the mist cleared and revealed the peak of one of the Five Sisters of Kintail. For a brief moment I knew that I was that distant mountain, it was me, and at the same time neither of us were anything at all. I’d stepped into Neil Gunn’s ‘other landscape’ and ‘my’ overwhelming feeling was one of happy relief. Mystical nonsense. Some might say. And those who know the way don’t talk about it, so that probably tells you all you need to know about me. Pointing the way, on the other hand, that’s what Neil Gunn still does.