Just as I was preparing to step on a plane to Italy and meander all author-like, interesting and improbably sweaty around the streets of Florence and the piazzas of Siena, the good people at The Press and Journal, Scotland’s oldest daily newspaper, ran an extract from A Private Haunting in their Saturday magazine. I may be an Arab and the P&J inveterate supporters of Aberdeen FC but hey, I’m not gonna be churlish about this…

You can see the article below, and here’s the extract as well. 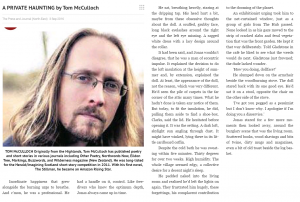 ”Jonas Mortensen lay under the cold water. Both arms floated free. No bubbles from the mouth.

Say a stranger, a beautiful woman, a beautiful naked woman, was looking down on him. What a strange introduction. Never mind how this woman came to be in his bathroom, that was irrelevant, just imagine what she’d make of it. She was probably thinking about cause and effect, the series of unknown choices which could only have led to this moment. She’d study the face, wondering what his final thought might have been, perhaps his mother, his first pet, the love that got away. A one-eyed children’s doll? The possibility was remote.

Jonas decided to breathe, his corpse-like serenity erupting into splutters and coughs as he rose from the water in a near panic. Two minutes twenty-three. He had no idea why a forty-five-year-old man did this other than he liked the feeling of inordinate happiness that grew alongside the burning urge to breathe. And c’mon, he was a professional. He had a handle on it, control. Like free-divers who knew the optimum depth, Jonas always came up in time.

He sat breathing heavily, staring at the dripping tap. His head hurt a bit, maybe from these obsessive thoughts about the doll. A scuffed, grubby face, long black eyelashes around the right eye and the left eye missing. A ragged white dress with a lacy design around the collar.

It had been said, and Jonas wouldn’t disagree, that he was a man of eccentric impulse. It explained the decision to do the loft insulation at the height of summer and, by extension, explained the doll. At least, the appearance of the doll, not the reason, which was very different.

He’d seen the pile of carpets in the far corner of the attic many times. What he hadn’t done is taken any notice of them. But today, to fit the insulation, he did, pulling them aside to find a shoe-box. Clarks, said the lid. He hesitated before opening it. It was the setting. A dark loft, skylight sun angling through dust. It might have winked, lying there in its little cardboard coffin.

Despite the cold bath he was sweating within five minutes. Thirty degrees for over two weeks. High humidity. The whole village seemed edgy, a collective desire for a decent night’s sleep.

He padded naked into the living room and realised he’d left the lights on again. They frustrated him hugely, these forgettings, his complacent contribution to the dooming of the planet.

An exhibitionist urging took him to the net-curtained window, just as a group of girls from The Hub passed. None looked in as his gaze moved to the strip of cracked slabs and feral vegetation that was the front garden. He kept it that way deliberately. Told Gladstone in the café he liked to see what the weeds would do next. Gladstone just frowned; the dude lacked wonder.

He slumped down on the armchair beside the wood-burning stove. The doll stared back with its one good eye. He’d sat it on a stool, opposite the chair on the other side of the stove.

‘I’ve got you pegged as a pessimist but I don’t know why. I apologise if I’m doing you a disservice.’

Jonas stared for a few more moments then looked away, around the burglary scene that was the living room. Scattered books, wood shavings and bits of twine, dirty mugs and magazines, even a bit of old toast beside the log basket.”