I’d rather watch Paw Patrol than the news. This pleases my daughter. I know that some parents choose to talk about world affairs with young children. But I’ll let her watch the cute pups for now, she’ll see the rabid dogs soon enough.

And I get to sing along with the theme tune as I eat my third bowl of coco pops. 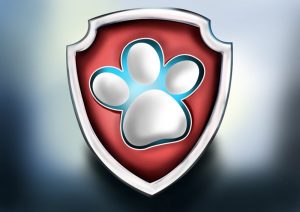 Likely I’m getting complacent. I have troubling dreams where my younger self is denouncing me in an SWP re-education session as the embodiment of bourgeois distraction. It’s not that I don’t give a damn. I do. Less than before, I think, though maybe this is just a phase. My outrage comes in cycles. It’s a lunar thing, or perhaps glandular, who knows. Thing is, there’s quite a high bar these days given the pouting narcissist in The White House. Where Clinton had to show it to every female he met I suspect Trump shows it only to himself in the mirror.

The problem with seeing a rabid demagogue at every turn is the waning of outrage. There’s so many of them, pouring down like aliens in an old Space Invaders game. Turn a corner see a Farage, turn another see a Le Pen. Over there a Trump and is that a Wilders, an Orbán? I almost left the accent off the Migrant Hunter’s ‘a’ but didn’t. It seems my need for linguistic authenticity over-rules even this minor act of defiance.

Is this what it has come to? I mean, this is a world where Angela Merkel – the Hausfrau with the hands that strangled Greece- is the great hope, her podgy finger in the dyke, holding back the surge of national populism. Yet it was the failed neoliberalism represented by Merkel, Obama, Blair et al who did so much to let the crackers out of the barrel (and some of them had more than a whiff of the populist about them…). Even irony can’t keep up, and last time I looked the lesser of two evils is still evil.

The situation is so lurid that in some ways it is difficult to take seriously. Set aside that razoring Marxist analysis, the totalitarian mind-set is not Vonnegut’s system of gears where the teeth have been randomly filed off but is an inferiority complex borne of years of bad hair. Trump’s roadkill toupee and the Hitler comb-over. Wilders ‘peroxide vampire’ (go on, draw some fangs) and Le Pen’s Pickelhaube bob. These are not the style choices of balanced people.

Because there’s still room to laugh, right? Because having to re-learn the lessons of history means we’ll eventually figure this one out, right?