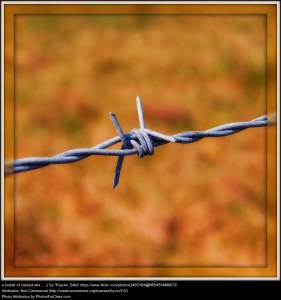 A magazine article tells me untold thousands of children have died in the Syrian War. Later, I’m in the pub. A newspaper on my table, the awful picture of Aylan Kurdi, dead on a Turkish beach. I have a daughter who is about two. I project.

Above me a gantry TV shows the news; crowds of migrants at Budapest train station, soldiers on the Macedonian border and another little boy, terrified in his father’s arms. Again, I project.

At the table beside me a red-faced man watches the TV and shakes his head. ‘They just keep on coming and coming,’ he says, looking to me for support which I don’t offer. He has a moustache that makes me think of the police.

Kurt Vonnegut described the totalitarian mind-set as a set of gears where the teeth have been filed off at random. The metaphor could fit for the reaction to ‘the migrant crisis’, where context becomes the filed off teeth.

Up on the gantry scrolls TV nothingness about the why; why are these people fleeing their homes? No mention of the long stretch of western intervention in the Middle-East, our border drawing, oil-grubbing and coup-mongering. Or the destruction of Iraq and the mirror-rise of Islamic State.

Without context an even larger monstrosity is created of Aylan’s death and thousands of others. Without the why a lie is made of their lives. The TV babbles about ‘migrants’ but these people are refugees, nothing could be more obvious. ‘Migrant’ implies choice, which feeds another narrative, that of people ‘breaking in’ to our country, and more lies; they’re coming for our benefits (actually inaccessible to them) and our jobs (the shitty ones we won’t do). Without context the individual becomes David Cameron’s ‘swarm’, a threat, the ‘other’.

The only threat in understanding these individual stories is to the shameful ‘humanitarian’ cover which hides western culpability in environmental devastation, economic desperation and war. To listen to these voices is to find out- shock, horror- that the West isn’t some Shangri-La no-one would ever want to leave but is full of men, women and children who only come because they desperately want to go back home again.

The red-faced man is still shaking his head. Maybe, who knows, he’s projecting too. But empathy without understanding is like shouting in a sound-proofed room.