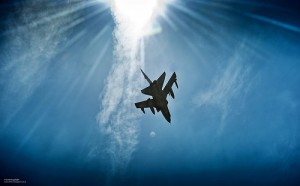 Somewhere on the west coast of Scotland. Late-December a few years back after an aborted hike. Dropping down in the car towards a loch and there in a swift-closing distance a plane, forty feet above the churning grey water. A Tornado fighter-bomber. The RAF, war gaming in the twisting glens, a strange stand-in for the epic flatness of the laughing deserts where we do our bombing these days. I remember a cold apprehension, watching that Tornado come straight towards us, like what if it opened up, because that’s what they do, isn’t it, strafing with those white tracing lines like in a movie, a video game.

It’s easy to bomb. Cathartic, for some. Though an equivalency of reaction for every terrorist outrage to that of Paris would have emptied the Lockheed Martin warehouses a long time ago. ‘The West is the best,’ as Jim Morrison sang. That paradise, how can you not see it, it’s right there, behind the fog of the Cruise missile blizzard that just levelled your neighbourhood. The Lizard King had another line, another song, ‘five to one baby, one in five, no-one here gets out alive.’ And I begin to wonder. It’s what we’re told- Isis are mediaevalists determined to bring the infidel West down into an imminent Apocalypse.

Maybe so. They grew up in the Inferno after all, children of the biblical vengeance rained down on places like Najaf and Falluja in the Iraq War, relatives of the 600,000+ civilian victims and countless children now being born with deformities from the use of depleted uranium shells, watchers of the violent denigration of any secular political movement not cravenly beholden to shifting western interests. Isis is a murderous nightmare of our own murderous creation. It did not exist before the Iraq War.

Yet apparently the way to defeat Isis is to bomb them with the same bombs that helped create them. With our smart weapons that all too frequently vaporise wedding parties, MSF hospitals… Raqqa, the Isis ‘stronghold city’ has a population of over 200,000. A couple of days ago an air-strike killed 8 children in a school there. Hundreds more civilians have been killed across Syria since Allied and Russian air-strikes began. This is no way to lessen the appeal of Isis and denigrates the memory of 130 people murdered in Paris.

Now more ‘catharsis’ is coming. And the crackle of AK47s will likely be heard again in a European city. More Tornados will practice in snowy glens until someone finally draws John Pilger’s inevitable conclusion: ‘Across the world, from Northern Ireland to Nepal, those regarding each other as terrorists and heretics have faced each other across a table. Why not now in Iraq and Syria?’