Tuesday night saw the launch of A Private Haunting at the fantastic Blackwell’s Bookshop in Oxford. More than fifty people came down to hear me read from the novel and ramble on about my writing. I was joined in conversation by 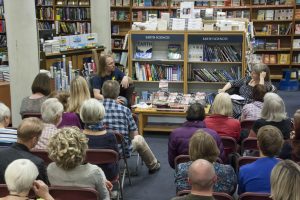 Fiona McPherson, Senior Editor on the Oxford English Dictionary, who asked some insightful questions, not least whether I’d gain inspiration for future novels by travelling to remote parts of Scotland to watch Dundee United now they have been relegated. She’s a St Johnstone fan, what did I expect…

Other questions included whether having a child has affected my writing (no, I’m just a really bad father…), what keeps me motivated to write (it’s a compulsion, I’m sure some people wish there was a cure…), 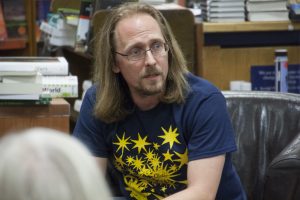 how I came up with the title for A Private Haunting (with some difficulty, and a doff of the cap to Martin Booth…), and the fact that I’d like Mads Mikkelsen to play the lead role if it’s ever made into a film.

The evening was topped off with wine, a cake, and me trying to remember how to write with a pen in order to sign copies of my novels. Thanks again to Blackwell’s for hosting, they did a great job. 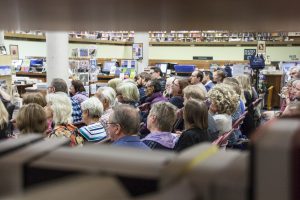 So A Private Haunting is out, the launch is over, and the first review is in, from a somewhat unexpected source – The Sunday Sport. A four-star review from Jon Wise who calls it a ‘nicely weighted thriller by rising talent’. I like to think the old reprobate Michel Houellebecq would approve.