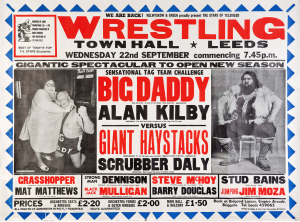 The DVD and vinyl stalls. Salisbury market. Stall man asks me what I’m looking for and I tell him Can, Faust, any kind of Krautrock. He shrugs, turns to a tap on his shoulder. Any wrestling DVDs? This guy in waterproof trousers, a red and white striped shirt open to the waist, big glasses and a Magnum PI moustache. He’s got brown-tipped teeth and untidily slicked back hair, an uncertain Teddy Boy. He looks like a man who’d line a dozen pairs of children’s shoes along the dashboard of his car. That sounds unlikely, sure, a screenwriter stretch. But I saw it once, a line of children’s Converse trainers on the dashboard of a Citroen Picasso parked outside my house. I waited for the owner to appear, I had to see, but when I came back from a piss the car was gone. Anyway, maybe some people you don’t want to meet… Magnum seems disappointed there’s no wrestling DVDs. He turns to me. I love it, he says. WWE. He takes his wallet out and shows me a picture of him posing with a pair of wrestlers called the Bushwhackers. Nice, I say, and give him some bull about liking the Undertaker, the only wrestler I know other than Hulk Hogan but even I know dropping the Hulk wouldn’t be cool. Magnum’s still suspicious. He’s uncertain, am I taking the piss? I realise his big glasses remind me of Dennis Nilsen mug-shots. My wife and I watch it all the time, he says. We fuckin love it. I wonder if his wife really, truly, does and make the mistake of chuckling. Best of the best, he says, coldly, then lets it go, starts on about UK wrestling. I say something about Giant Haystacks and his eyes light. He loves it, off on a memory ramble of tours in provincial towns in the mid-80s. He starts to mimic my body language and I drop in a reference to Catweazle; but no Big Daddy, to mention Big Daddy would be like dropping that reference to Hulk Hogan. But now I’m empty. Catweazle is my last card. I have no more wrestlers in my spandex lined memory-deck. A dying art, he says, staring at me for a while but not seeing me. A fuckin dying art. And he wanders off. Slow and sad. I notice he’s wearing Converse trainers.